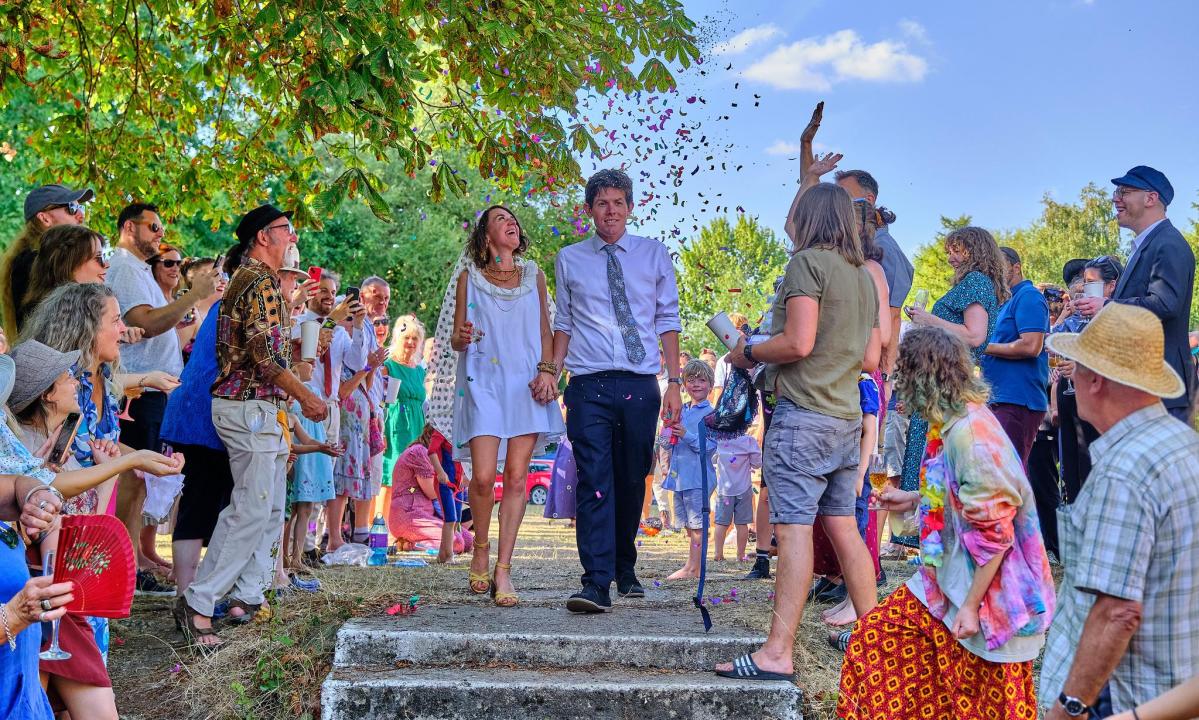 In a sense, the term “ethical marriage” is as contradictory as, say, “sexy foot bath” or “welcome ingrown hair”. Yet, after years of railing against the marital-industrial complex, I still wanted to try. When, in a rather unlikely move, after seven years of living together and nearly five years of co-parenting, my partner and I decided to get married, we were both eager to keep it as ecological, economical and ideologically sound as possible. If you’re expecting intertwined rings with nail clippings and a wedding lunch pulled out of a garbage can, I’m sorry to disappoint you. But the whole thing cost us about the same as my parents’ wedding in 1992 and the only thing we bought new was the wine. And we had it delivered by bicycle.

Our marriage was divided into two parts. First, there was the legal part: as the first few months of our relationship took place almost entirely in locations along bus line 38, it seemed appropriate to do so in Hackney Town Hall in East London. So my parents, my partner, my son and I took the train from Oxford and got on the tube carrying our wedding gear in backpacks and duffel bags. I changed in the bathrooms of a roadside cinema, my ex-boyfriend and his wife were on our list of 14 Covid-safe guests, my son lay in the middle of the carpet during the ceremony and chatted loudly. voice to herself to stave off her inevitable four-year boredom and wore a dress I’d made for a total of £ 8. Including underwear.

The average price of a wedding dress in the UK – according to an army of websites specifically dedicated to the noble art of shaving their readers – is around £ 1,300. I made five wedding dresses for a total of £ 29. The first one, for our legal section, was made in light apricot fabric which I bought at a market in East London: I sewed three gold hearts on the front: one for my partner, one for my son and one for me. I made a £ 1 cut veil and headband from a charity shop. My shoes cost £ 1 from a car boot sale. After the ceremony, we all turned the corner to eat pizza and drink alcohol at a nearby pub before taking the train back to Oxford.

The second part of the wedding took place three weeks later and was a slightly bigger affair. By that I mean we spent over £ 100 and it’s not over at 5pm. I wanted to get married in a place where we could ride a bike, as we are both virgins who can’t drive. And anyway, since, as a fan of breathing and safe movement through the world, I would much prefer people walking, cycling or taking the bus whenever they can. And that’s how I ended up sending an email to a troop of scouts who have a room at the bottom of the river, near a vegetable garden, where my friend Sharon learned to canoe in the 1970s.

That was great. There was a camp to camp in, a kitchen, a giant bell (because you never know), a big pink windsurf sail hanging on the wall, toilets, a kitchen full of mismatched dishcloths and it all opened on a stretch. of the shallow and silty Thames, covered with willows and blackberries. They let us rent it for two days for under £ 1,000 and their only real request was that my partner and I consider volunteering as a scout leader. I decorated the tables with sheets and curtains, plates, glasses, cutlery and vases, all purchased from the charity shops around our home. I filled the pots with herbs and wildflowers picked the day before next to the towpath and my friend hung the room with beautiful colorful decorations used a few weeks earlier at a mutual friend’s memorial.

Just by coming to our wedding and eating at those tables, each guest has probably inadvertently donated around £ 2 to Emmaus, Oxfam, Mercy in Action, Shaw Trust or our local children’s hospice, Helen and Douglas House. Did that mean spending the days before and after the wedding on my knees in my garden, at 34 ° C, washing what looked like 1,000 forks and glasses of wine in a bucket? She did it. But was it worth it to take the whole lot back to those various charity shops for resale? I think so.

For this wedding I wanted some outfits. Different dresses. I made a white linen dress with “An Honest Woman” sewn on the front. I made a veil by recycling the same headband from a charity shop and a strip of fabric I bought on my main street just steps from Oxford’s only sex shop. The night before the wedding, I was found refreshing the BBC time page as a compulsive gambler on a fruit machine, wishing the outcome was different while knowing deep down that I was doomed. The forecast for our wedding day, and indeed for the previous three days, was 35 ° C. My sister got married in India in a cooler temperature. And so, within hours of finishing, I decided to cut out one of our white sheets and turn it into a voluminous, short dress, in which I could gleefully sweat without sticking to the furniture or, I hoped, pass out. I had bought a white bikini on eBay for £ 4, realized it showed about 10% of my pubis and so quickly pulled a white lace cover out of a piece of material that I initially thought would work as a cake topper. . keep flies away. Finally, drawing inspiration from Gram Parsons’ nudie dress, I made a pair of trousers and a top covered with applied flowers, hearts and our initials. The fabric came from a local charity that recovers fabrics and other materials from companies that would otherwise end up in landfills. It cost me around £ 10 and took so long to hand-stitch all those bloody petals that I listened to Jaws’ entire audiobook as I did it.

A party is not a wedding unless you have some food and so, after playing with the idea of ​​catering for all 100 guests on your own (until I pictured myself standing in a scout kitchen, in a couple of sports shorts, surrounded by bowls of cucumbers and sacks of rice as people started to arrive) I approached Damascus Rose, a social enterprise that supports refugee women in Oxford. We ate delicious Middle Eastern food, served by a Syrian woman who, out of the blue, asked if she could give a speech in the middle of the meal. My mother arrived from Cardiff with three layers of orange and polenta cake, which she then decorated with blackberries from the nature reserve behind my house and a figurine my sister made with me and my partner in our new inflatable canoe. . Another friend made three sensational cakes as a treat, and, standing behind a folding table in a wet bikini (like many of the guests, I was just swimming), I served them to our overheated, shade-hungry guests. It was one of my favorite parts of the whole day.

When you are chaotic, ambivalent about marriages, and eager to do things ethically, there are inevitably things that are forgotten or lost. The 50 jars of jam that I had carefully accumulated and washed over the past six months to fill them with candles in the evening remained hidden somewhere in a bag. The sweltering temperature inside the hall during the meal became so unbearable that neither my mother nor I got to give our speeches (rightly so, they all exploded from the building and ended up in the river after about two hours of slow roasting. ). I forgot my bike lights so I had to recruit a myriad of cyclists to head up the hill and pick up the crisps and mushy peas that were served when the sun went down.

But, in the end, I think we made it. A friend’s mom – a fervent former midwife and feminist, preparing to become a funeral home – brought us together for a small, informal ceremony of our own making in which, against all my intentions, I cried. A group of children rang bells borrowed from another married couple. Two old friends offered to take photos during the day and did so, at times, in swim shorts. And my husband and I spent our wedding night in a tent, sleeping on the sides of an inflatable mattress on which our four-year-old son slowly rotated like a Catherine wheel, forgetting to brush our teeth.

So, is it possible to organize an ecological, ethically healthy and economical wedding? Only with hard work, lots of help from loved ones and turning a blind eye to the mess. You know, kind of like a wedding. 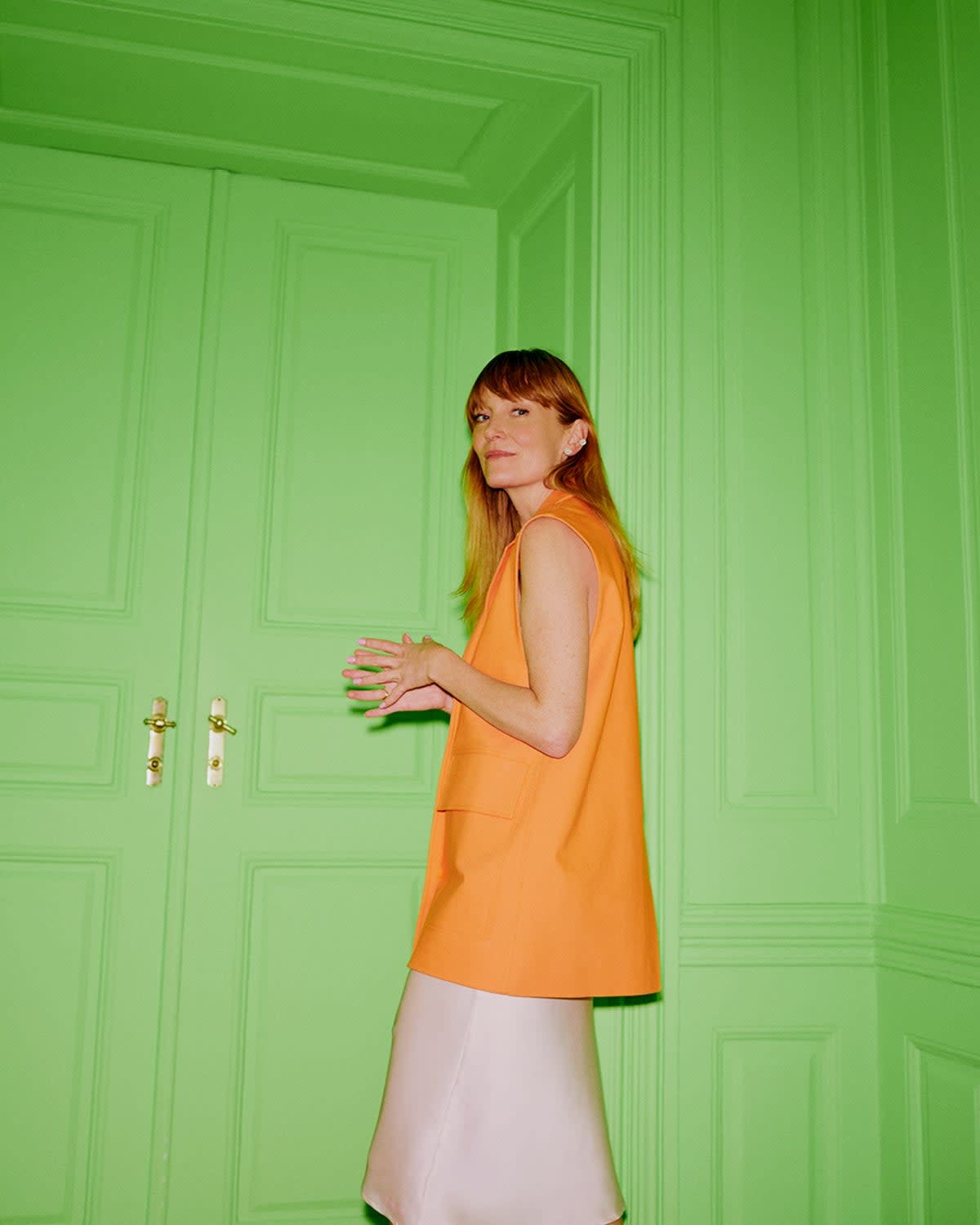 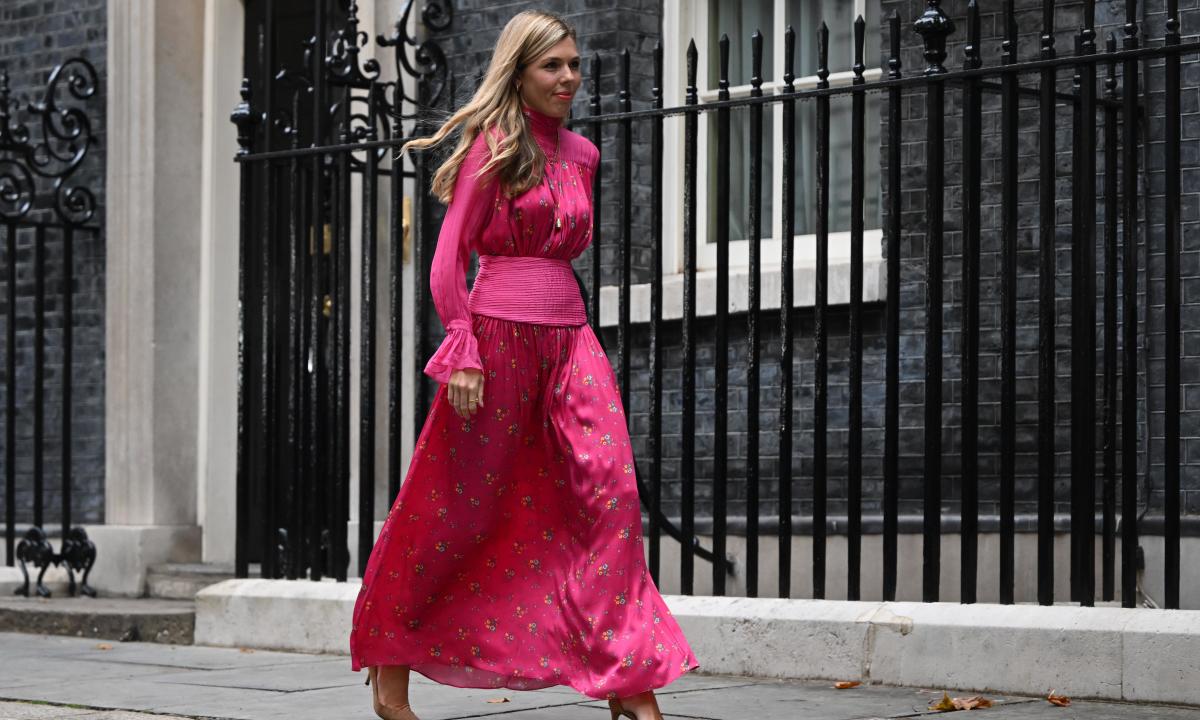 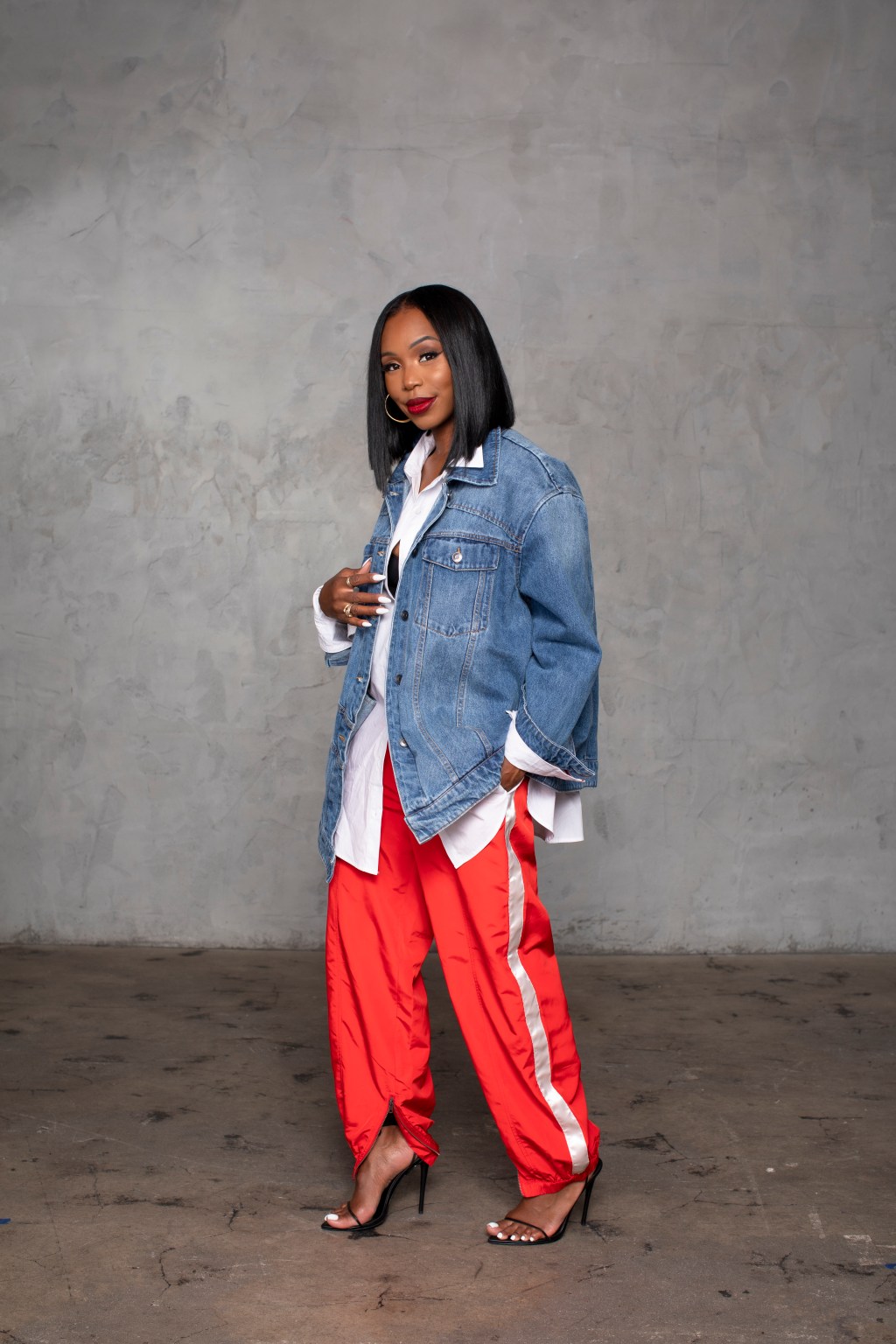